Some of you might remember the Seinfeld episode where Tim Whattley re-gifts a label maker that Elaine Benes has given him. That dang thing ends up getting passed all over town. If you don’t remember, here’s a quick refresher:

Well then surely you remember when Rudolph the Red-Nosed Reindeer accidentally lands on “The Island of Misfit Toys,” where unwanted playthings with cosmetic or physical flaws live until the island’s ruler, King Moonracer, can find homes for them?

Why am I babbling about old label makers and effed up toys?

For several years now, the members of my neighborhood book club have gathered after the winter holidays and, in lieu of discussing a book, each of us brings one gift that is so freaking craptastic we just have to get it out of the house.

And give it to someone else.

You know, because one woman’s trash is another woman’s treasure.

After everyone ate their fill of yummy nom-noms and slurped down some wine, our host told us it was time to get to it. We circled her coffee table where all the bags of horror sat sagging in their repurposed wrapping paper. The rules for this year’s swap were quickly established.

Our host handed us numbers that she had scribbled on slips of yellow paper. I must have been born under a star or something because I got the highest number, which meant that I was going to see most, if not all, of the goods that came before it would be my turn to pick, thus ensuring my victory would be sweet.

Here’s how it went down.

Kate went first. Reaching into her bag, she revealed two pairs of holiday socks and the windshield scraper Santa might use on his car. You know, if he didn’t have a garage and the reindeer were tired, and Mrs. Claus needed to pick up a few items from Bed, Bath & Beyond up there at the North Pole. 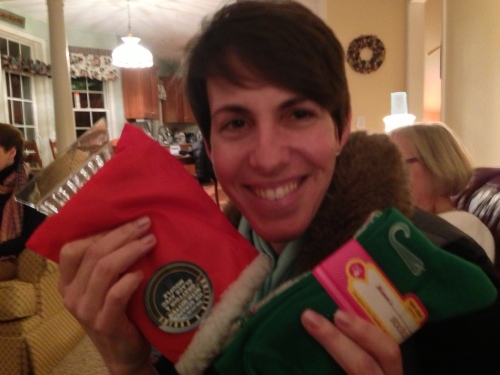 After she showed everyone her goods, Kate burst into laughter and confessed that she’d picked the gift she’d brought to the table last year. Like the mythical holiday fruitcake, Kate’s bag o’crap had returned to her.

Bonnie wound up with some fabulous sunglasses and other sundry items. Every single item in her bag was solid gold. Unfortunately, they cannot be shown here. (Look, I am not a fool. And I know not to look one particular gift horse in the mouth.)

Liz unwrapped a frog ring, which broke the instant she put it on her finger. But she also got the Wine Bottle Sock Monkey, which she assured us would make a great puppet for her sons to play with.

Cindy #1 took home the enormous cranberry scented candle that thought it was a lamp. Seriously, check out that shade. The thing weighed eleventy-six tons. Look how excited Cindy is!

Cindy #2 scored a pair of faux-gold earrings circa 1986. And look! She’s set for Valentine’s Day with the Spin-The-Bottle-Button.

Lori got the Garden Gnome Salt & Pepper Shakers. I know that someone out there would love these. But probably not Lori.

You cannot really appreciate the bedazzled, super glittery handles on the faboo 4-piece cheese spreader set that Mary Jo landed. At first, we thought the handles were filled with Goldschlager. But no. Everyone agreed the spreaders were very functional .

Theresa selected a well-endowed snowman whose nether region consisted of three different color candles. When this fact was called to everyone’s attention, the embarrassed snowman promptly lost a leg. (Look at the poor snowman’s face!)

I peed in my pants a little when I won the box of Whitman’s chocolates. I told you my ending was sweet! That’s called punny foreshadowing, people. 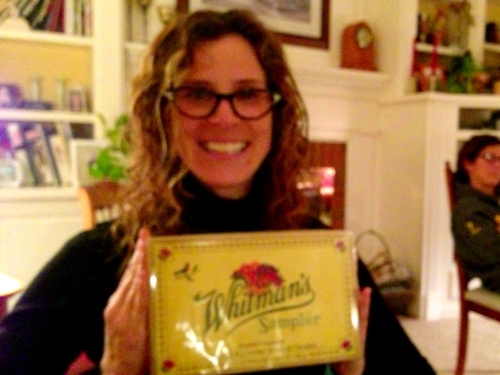 No matter what we brought home last night, we were all winners because caring is sharing. No. Because each time the members of book club get together, we learn more about each other. Once, I Tricked My Book Club Into Writing. (They forgave me.) So whether we yadda yadda yadda about books, share life lessons, or trade playthings from “The Island of Misfit Toys,” it is always a delight. I am blessed to have these women as neighbors and plan to enjoy our ever-evolving reindeer games for a long time.

Anyone else have non-book-related book-club traditions? What else do you do in your book club besides talk books?