This is the 2nd part of a three-part piece on why I send my child to overnight camp. Click HERE to read part I. 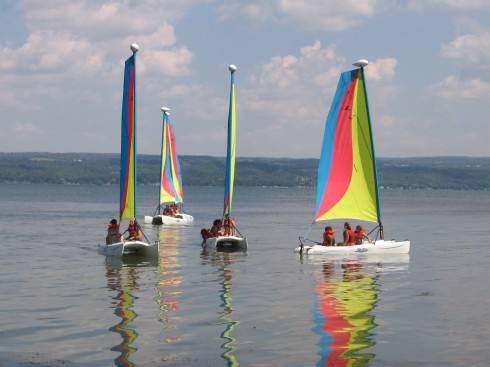 As I mentioned in my last entry, there are definitely parents who buy into the whole ethos of sending one’s child to overnight camp. This entry is not written for them, as that would be preaching to the choir. Really, these pieces are for all the people who have ever looked at me sideways, gotten all judgmental on me, and wandered off whispering to a friend after I have proudly admitted that I send my son to summer camp. And yes, he has been going since he was 8 years old and, yes – eventually – instead of a mere 3 weeks, he will likely spend his entire summers there.

If my last entry didn’t convince you, here are even more benefits to sending your child to summer camp: 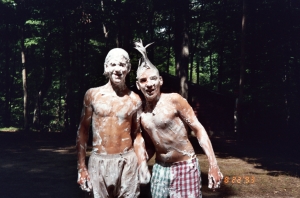 A chance to be a little bit naughty. Some of my favorite camp memories involve being a little bit “bad.” We girls would raid the boys’ cabins, get all their underwear, and hang them on the flagpole in front of the dining hall. Then, they, of course, would get us back. We would stay up way past our allowed bedtimes (at home) and torment the on-duty counselors in the village, claiming there were ghosts in our cabin. (Really. There were. Three of them.) Sometimes we refused to participate in a particular activity – just because. We were kids exercising a little bit of control that we knew we probably wouldn’t have gotten away with at home. My son said that one of his favorite “naughty moments” happened one year when the counselors and campers threw rotten plums, mustard and ketchup  at each other. “It was like getting slimed!” he exclaimed. He mentioned that a few kids also “smeared shaving cream all over each other”; these are things campers all across the country do each summer, but to kids, these oldies but goodies are eternally new. And of course, all of this programming is created and orchestrated by a very capable staff who oversee everything and make sure no-one gets  too out of control. 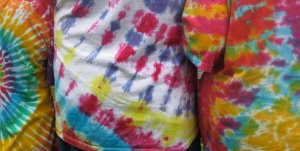 A chance to get down and dirty. During the school year, kids worry so much about their physical appearance. They want the “right” clothes from the “coolest” stores. At camp, with the exception of a few special programs, campers can relax and not worry about their clothes or their hair. If it rains, they can cover themselves in mud, go mud-sliding, make mud pies, and then  wash-off in the lake. They can have a huge all-camp Color War that goes on for days and culminates in one crazy event like a giant colored water balloon contest and laugh as the inky ballons explode on impact. Heaven help me, but they can go to bed without brushing their teeth. They can even go to bed with dirty feet. Now I may be an extreme neatnik, but it’s hard for me to imagine even the most mellow parent appreciating a mud-covered kid lounging on the couches or dragging funky feet over freshly vacuumed carpets. At camp, anything goes when it comes to good, wholesome, messy fun. 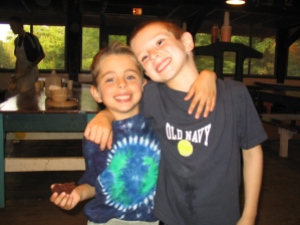 A chance to make lifelong friendships. When people live together for extended periods of time – adopt the same schedule, perform the same daily rituals, sing the same songs, chant the same cheers, share the same inside jokes – a community is formed. And when people return year after year, this community becomes a kind of family. Many of the people I consider to be my closet friends are the people I went to summer camp with nearly 30 years ago. Some of them live nearby, some of them live farther away. These relationships ebb and flow, but I feel confident when I say that I have a core group of folks whom, I believe, that if I needed them, I could count on them to be there for me. To loosely quote James Taylor, I could just call out their names, and they’d come runnin’…

9. The opportunity to rediscover my spouse. During the year, husband and I tend to become so child-centered that we often toss our own interests aside. Even our connection to each other sometimes falls on the back burner. It’s always there; it’s just that sometimes it’s on a low simmer. While our boy is off enjoying himself at camp, we can refocus our energy and rediscover each other — which is nice. So after he is done with work, hubby gets unlimited, guilt-free golf; and I get to swim and write and write and write without interruption. We eat later than we usually do, and we talk about adult stuff. We go out with friends — often with plans made at the last moment — and never have to fuss about making sitter arrangements. We watch movies that we have been putting off forever, and we even have a chance to make plans about the future as individuals and as a family. We are dangerously free, which is kinda nice. Honestly, alone-time with the spouse is not to be minimized! 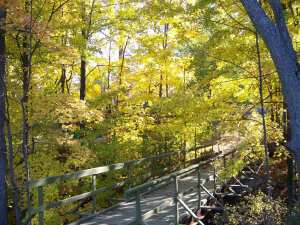 The Big Reunion. Unlike Alice who falls down a rabbit hole and unwittingly lands in Wonderland, or Dorothy from Kansas, who accidentally lands in Munchkinland after a tornado carries her house away, there is nothing accidental about our son’s departure. The week before he leaves, we create a “staging area” where we label all his clothes. We make a very intentional trip to The Dollar Store for glow sticks and decks of cards, whoopee cushions and over-sized sunglasses, and all kids of other goofy kid stuff that he can use while at camp. He packs his favorite books and magazines and a few packs of gum. And, believe me, that kid is psyched! That said, like anyone who has ever journeyed from home for a while, while one certainly appreciates the change in scene, the people, the opportunities to do things you have never done before – perhaps you never thought you’d ever get to do – at the end of the journey, it always feels so good to go home. We are all reminded of the meaning of the words “fortunate” and “grateful” and “love.” Our son remembers how comfortable his bed is, and we are amazed at how quickly children grow.

For a few days, I don’t mind when my son carelessly tosses his sneakers about or that he forgets to put his dishes in the sink; I realize he’s out of practice. I don’t mind the seemingly endless loads of laundry, the piles of important rocks that he’s brought home, and I actually enjoy washing a few extra dishes because I am just so happy we are together again. I kind of love that 80% of his sentences start with, “When I was at camp…” or “Did I tell you about the time at camp when I ….”

What can I say? It’s in his blood. He drank the bug-juice and loves it.