Being Neighborly - renée a. schuls-jacobson
because life doesn’t fit in a file folder
JOIN MY TRIBE.
Sign up for Occasional Extras and Special Discounts.
WHAT I WRITE ABOUT
SEE MY ART.
READ MY WORDS.
SEE MY TWEETS.My Tweets
HANDS OUT OF MY DRAWERS!

Growing up, I knew everyone in my neighborhood. The girls across the street were my babysitters, and they let me sit in the funky purple bedroom and play with their Barbies. The older couple who lived next door to my parents had a tiny little poodle, and the Mrs Z. liked to watch me practice my gymnastics on the lawn. The neighbors on our other side were a little standoffish, but we understood this about them and still waved as they passed in their beige car. There was an older woman who nurtured a fantastic garden in her backyard. She taught me my first words in French: “J’adore les fleurs.” The people behind us had children, and my brother and I would stay out late playing kickball and running barefoot in their tall grass until it grew dark and we could no longer see the ball. I loved knowing my neighbors, and I suppose I have tried to reproduce similar kinds of connections no matter the type of community in which I found myself living.

Being a good neighbor has always been important to me. In graduate school, a cool guy named Roger lived downstairs and we regularly got together on Thursday nights to share dinner and watch Seinfeld, Friends and Melrose Place. In exchange for Roger’s many kindnesses — like his terrific banana bread and fettuccine — I tried not to wear my clogs inside my apartment because I knew if I did, well, my floor was his ceiling, so it would have been like stomping directly on his head.

Fast-forward fifteen years, and suddenly my husband and I found ourselves living in our first home: a cedar-sided, contemporary on a cul-de-sac. We didn’t know anyone, and no one seemed to want to know us. I was lonely. I couldn’t help myself; I set out to figure out who everyone was. Walking from house to house, I asked people if they would supply their names, their children’s names, and email addresses, so I could create a big ole neighborhood directory. As it turned out, nearly everyone was interested! In fact, in meeting my new neighbors, many people confessed they were embarrassed that they had lived in their homes as long as they had without knowing the people who lived on either side of them, but they always added, it seemed too much time had gone by to ask.

I was happy to be the New Girl and, at the very least, help everyone learn each other’s names. We distributed the directory digitally and used it to organize garage sales, to remind people to drive a little more slowly in the summer, to announce births and graduations, to share pertinent neighborhood information. People would thank me, and I would always tell them creating the list wasn’t a completely selfless act. 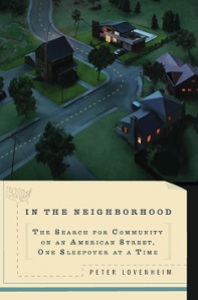 In his book, Lovenheim sets out on a mission to meet his neighbors, to try to make sense of what happened on the night the tragedy occurred. In the process, he meets families and pets and witnesses daily routines, asks what it is that makes a place a home, and a street more than merely an address. In reaching out, he finds others also searching for connection and longing for what used to be and, in doing so, he inadvertently becomes a “connector,” bringing people together to help each other. Lovenheim writes:

In the Hebrew Bible, the word most often translated as “neighbor” rea can mean variously: friend, tribesman, fellow Israelite – pretty much anyone not a close relative or foreigner. “Love your neighbor as yourself” (Lev. 19:18), therefore, is a broad injunction to treat kindly most of the people we encounter daily. But rea also has the narrower meaning of a person living nearby: “A close neighbor is better than a distant brother,” advises Proverbs 27:10.

In this age of texting and Skyping, email and Facebook, we have what I call the illusion of connection, but I believe many people crave deeper connections with each other. More neighborly connections. Quiet moments when people who may not share any kind of common past can share a street, can know each other enough to agree to take in each other’s mail, to water each other’s flowers, to feed each other’s pets, maybe watch each other’s children, share each other’s joys and — if it feels right — extend themselves during times of sorrow. In the very least, they can wave hello.

These days, my husband and I (along with our 11-year-old son) live in a different neighborhood. And with the exception of a few folks, I recognize nearly everyone in my neighborhood. Okay, so maybe I don’t have to sleepover at everyone’s house, the way Peter Lovenheim did, but it’s nice to be neighborly. I love that my son knows the neighborhood kids. In warm weather, they jump on trampolines, squirt each other with water guns, and play with LEGOs in people’s basements. In the winter, they sled together, slim slices of color against the white snowy field. With the help of neighborhood email, annual Halloween parades are arranged and concerns about suspicious vehicles are passed along. A Book Club was born, and a piano was last seen being rolled across the street from one house to another.

I have found that when you get down to brass tacks, many people don’t know their neighbors. Not really. When you ask people if they know their neighbors, many say, “Sure.” But if you probe deeper, you find that most people don’t know who lives in which house, what people do, the last names of their immediate neighbors. People living next door to each other don’t know each other — at all. Folks drive in: garage doors go up, garage doors go down. I’m not saying this is an inherently horrible thing. I’m just asking people to think about the scenario that happened in Brighton, NY in 2000.

Could you borrow a cup of sugar from someone right now? Would it feel weird to even ask? Do you have someone in your immediate vicinity whom you could go to if you felt unsafe? Because in an emergency, having to drive ten minutes to a friends’ house is sometimes too far.

In this New Millenium, where there is so much media hype telling us to be afraid, knowing one’s neighbors can offer a lot of solace.

Peter Lovenheim is on tour speaking in various venues about his book. If you are lucky, you will catch him!

19 thoughts on “Being Neighborly”