Dear Diary, I Hate You: A #SoWrong Moment by She’s a Maineiac

In seventh grade, Darla wore her heart on her sleeve.

Also on her boob.

Once deemed by a reader as a “humor-infused mommy blog that doesn’t suck”, She’s a Maineiac, is also low-calorie, lactose-tolerant and good for the ozone layer.

Don’t try to find Darla on Twitter. She doesn’t hang there. Darlakins resides in Maine with her kiddies and her husband. And the real fun happens on her blog. Visit her there and she might buy you a coffee. Or you could buy her a drink. She needs one. Right now.

Dear Diary, I Hate You

I knew the moment our sixth grade science teacher made us lab partners, John was The One for me. It was the way he smirked and shrugged. The way his dark Rick Springfield hair spilled into his eyes. The way he wore his faded jean jacket with the collar flipped up and his scuffed white high-top Reeboks oh-so-recklessly untied.

Oh, yes, he would be my boyfriend. I couldn’t wait to rush home and kiss my Ricky Schroder poster farewell.

John kicked the empty chair next to me to the side and plunked himself down on top of the lab table. “Hey,” he smirked and shrugged at me. Immediately, he began gnawing on his pencil and glancing over at the girl he was rumored to admire, Gina.

Gina. Pfft. Gina who had perfect hair and perfect nails and a perfectly stupid hot pink comb jutting out her back pocket with the bold (and vastly overstated) claim: HOT STUFF!

I looked back over at John, the object of my affection, who was now grinning maniacally as he stabbed the sharp end of his pencil into the earthworm splayed open on the dissecting tray in front of him.

No matter. I still loved him. And one day he would be mine because I had other, more sinister plans: to write John ♥ Darla with sparkly rainbow-colored markers all over the cover of my Social Studies book. Destiny written in purple and surrounded by Garfield stickers. But first I had to tell my diary about this momentous occasion in my riveting 12 year old life.

My crush continued. John and Gina became a couple. Still, I knew our life together would begin sometime during the upcoming Spring Dance when he would finally confess his undying love for me; probably after we grooved to “The Safety Dance” but definitely before the slow, let’s-get-all-sweaty-and-awkwardly-slump-over-each-other song “Open Arms”.

But along with Tracy, a year later and John was acting weird. He was avoiding me at the lockers. He wasn’t looking me in the eye as he stabbed at yet another defenseless earthworm. No longer was he tipping my chair back, or shooting rubber bands at me, or pretending to not really like me. Our spark was gone.

And I was truly puzzled.

Maybe Gina had forever sunk her perfectly manicured hooks into him after all? It was probably that damned hot pink comb that did him in. All my comb said was, “SUPER!” I knew I should have bought the other one at K-Mart! My life was over. My diary entries were a flurry of lost hopes and dashed dreams.

The only thing deep down in my soul I knew to be true? Genesis did suck.

Then came the fateful day when John asked me if I’d like to share a piece of chocolate with him at lunch. Maybe I shouldn’t have taken him up on his offer. Maybe I should have passed on the sloppy joes earlier. Maybe the fact that his best friend Brian was laughing out of the corner of his mouth when he offered it to me should have alarmed me.

But maybe, just maybe…he liked me after all?

“Sure!” I gushed, and popped the bitter square of dark chocolate in my mouth, eagerly gulping it down.

“Ha ha!” John yelled, pointing at me. “You just ate EX-LAX! SHE JUST ATE EX-LAX!” He turned and grinned at his friends. My heart stopped. 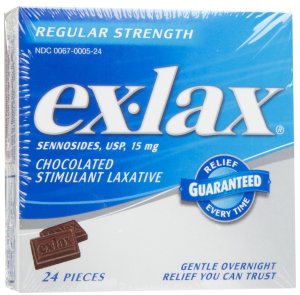 It was an honest mistake! I swear I’m not normally so stupid.

Tears spilled down my hot cheeks. Brian and John burst into a howling fit of laughter, almost falling off the cafeteria table. I turned and ran down the hallway, barely reaching the girls’ bathroom. Plunging my head into the sink, I tried to spit out the vile candy, but it was too late. My stomach lurched.

I flew into a stall and prepared for the worst. “Darla? Darla?” my best friend Amy’s voice echoed in the bathroom. “It wasn’t really Ex-Lax! They were joking!” she yelled. “I swear, it wasn’t! We all ate some! It’s not Ex-lax!” It took several more minutes before I was convinced to leave the safety of the stall. I barely got through gym period without crying, certain a poop avalanche was imminent.

After school, I threw myself onto my pink canopy bed to write in my tear-stained diary about how the man I loved had betrayed me.

But where was it, my cherished diary? The only place I felt safe enough to reveal my ultra juicy secrets? I could have sworn I’d left it on my night stand right next to my Laura Ingalls doll…

I peered over the side of my bed and there it was on the floor. My diary–its tarnished lock open, exposing the pages of my innermost dreams for the entire world to see.

Someone had been reading about the Man of My Dreams all along.

Someone knew how much I pined for John’s Reeboks.

Someone knew all my secrets.

My heart flip-flopped as I realized the ultimate horror–someone had told him I had a crush on him!

They all knew. Specifically, the older one who was only two grades above me and knew exactly what to say to make John steer clear of me for good.

I learned many hard lessons that year:

Did you keep a diary? Who and what did you write about? Did anyone ever use your diary against you? If you didn’t keep a diary, where did you put all your juicy tidbits?

181 thoughts on “Dear Diary, I Hate You: A #SoWrong Moment by She’s a Maineiac”