Do You Know How To Get To The Emergency Room? - renée a. schuls-jacobson
because life doesn’t fit in a file folder
JOIN MY TRIBE.
Sign up for Occasional Extras and Special Discounts.
WHAT I WRITE ABOUT
SEE MY ART.
READ MY WORDS.
SEE MY TWEETS.My Tweets
HANDS OUT OF MY DRAWERS!

When my nephew was 18-months old, he fell down a flight of stairs. Landing with a thwack on the hard brown tiles, he knocked himself out cold. Hearing the awful sound, my brother-in-law ran to find his youngest son, Alec, unconscious at the base of the stairs. Imagine finding your child floppy and unresponsive. Thinking fast, my brother-in-law made one quick phone call, picked up Alec’s limp body, and grabbed his car keys.

“I’m taking your brother to the hospital,” he shouted to his older son, Max. “Grandma is on the way.”

Just 4-years-old at the time, Max paused the two-person video game he had been playing with his father and hurried to the mudroom door.

“Dad?” Max furrowed his brow with concern. “Can I play your guy?”

Standing in the hallway by the garage with Alec cradled in his arms, my brother-in-law conceded: “Yes, Max. You can play my guy.”

Then my brother-in-law drove to the hospital.

A radiologist, he knew exactly where he was going.

Because he drove to the hospital every single day.

I hadn’t thought about that story in years.

Until the other day.

One of my roomies from BlissDom, Greta Funk (aka: Gfunkified), posted a photo on Instagram. 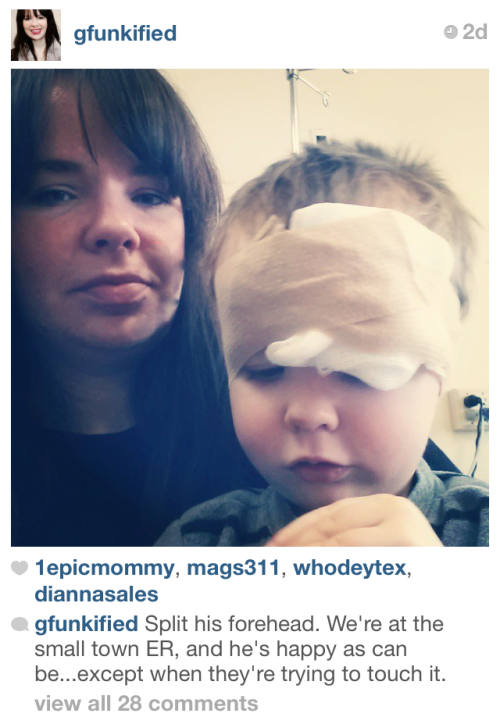 Apparently, her little guy fell down and went boom.

We all know head wounds bleed a lot, yes?

As it turns out, Erv needed three stitches on his noggin.

And because it was their first trip to the emergency room, Greta had no idea where to go. 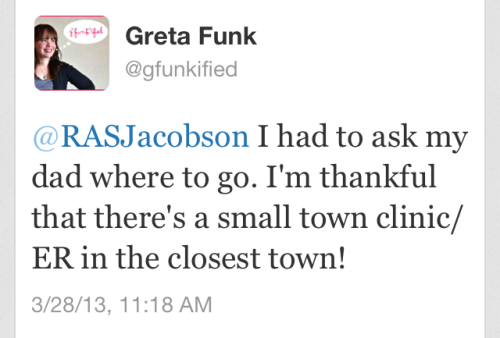 That got me thinking.

If something happened around these parts, what would I do?

Rochester is a small city; you’d think I’d know how to get around after living here for over a decade. However, I haven’t had to make a trip to the you-know-where.

When I saw Greta’s photo, I tried to picture how to get to our nearest hospital, but I couldn’t visualize the best route.

It occurred to me that it would be a good idea to find out.

After consulting Google Maps, I now know I live 8.8 miles from the nearest hospital.

It will take me 18 minutes to get there if I take the Expressway.

Twenty-one minutes if I choose to take city streets.

When you’re in panic mode, that isn’t the best time to tap information into your navigational app.

If you are directionally challenged like I am, you might want to do what I did and print out a copy of the instructions and stick them in the glove compartment of your car. Or pre-program the address for your preferred hospital into your GPS or phone. Make it a favorite.

Fingers crossed, you’ll never need to drive anyone to the emergency room, but if you do, at least you’ll know where the heck you are heading.

Everything turned out fine with Greta’s son. His bandages were removed, and he’s down to bump and a Band-Aid.

My nephew was fine, too.

No concussion. No repeat episodes. Alec is in college now.

And what of his older brother? Max is in medical school.

He still loves video games. But not more than his brother.

What kinds of mishaps have brought you to the ER? And did you know where you were going?

48 thoughts on “Do You Know How To Get To The Emergency Room?”