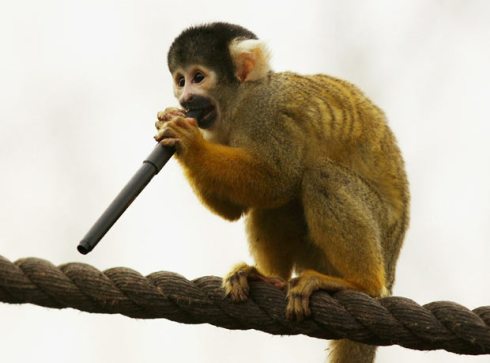 Last June, Monkey and I worked out an agreement. If I bought him the world’s most awesome double barrel water-gun, he promised that he would continue to practice playing piano, reading Hebrew and honing his writing skills over the summer. The first two were easy. The third was harder, but really important to me. I have seen how long summer vacations — while wonderful — can cause kids’ brains to mushify. I didn’t want him to forget his skills.

In an effort to capitalize on Monkey’s innate love for all things technological, I suggested that he start a blog. After all, last May my own blog was in its infancy, and I figured we could sit side-by-side and write together. It was a romantic notion.

“How long would these posts need to be?” the pragmatic Monkey asked.

Monkey is a Math/Science guy: not a fan of the “intentionally vague.”

“Sure,” I said, figuring any writing he did was better than none at all.

Then Monkey attempted to up the ante. “But I don’t have to write you when I’m at overnight camp.”

“What?” I challenged, a little miffed. “You definitely still have to write me when you are at camp. For goodness sakes, I would like to know what you are doing when you’re away for three weeks!”

“Fine,” I countered, “But in the meantime, you have to make sure that every blog includes correct spelling, proper punctuation and some kind of image or video — for the reader’s interest.

So this year Monkey is blogging again. And while last year, he wanted his blog to be “our secret,” this year, he wants readers. I told him I would pitch his blog — if he agreed to up his word count to 200 words per post.

So here I am, doing my part.

Only he seems to have forgotten his end of the bargain, seeing as his first post had only 157 words.

Anyway, if you’d like to check out the inner-workings of the mind of an 11-year-old boy, click here.

If you’d like to subscribe to his blog, I can guarantee you there will only be six entries as he heads off to overnight camp at the end of July.

How do you keep your kids writing over the summer? Or do you just let them shut down?

19 thoughts on “Monkey is Blogging”