POST-PUBLICATION NOTE: WordPress automatically changed the title of my piece to “Things Pro-Choice Proponents Should Never Assume,” — which feels creepy to me. I have manually gone in and changed the title back. I hope you will will read to the end for the larger purpose of this piece. 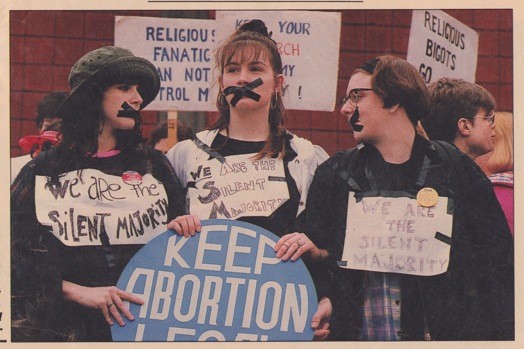 The beauty of our country is that we have the right to agree to disagree. We can resolve things through voting and debate, but some topics strike such a tender chord with people, it is sometimes difficult to have any dialogue at all.

When I was in college and graduate school in the late 1980s – early 1990s, I believed that every educated person was Pro-Choice.

I didn’t recognize it at the time, but this assumption was actually built into the course syllabus.

Folks with higher degrees were The Smart People.

And Smart People were, of course, Pro-Choice.

In 1991, I landed my first job teaching 3rd grade English as a Second Language. I worked with a teacher whom I adored. Kathy was smart, generous, kind, and warmhearted. She treated every child equally. She arranged the desks in neighborhoods and talked about community responsibilities. She bedazzled her bulletin boards and spent a lot of time doing little things she believed mattered to her students.

And her students loved her.

In the spring of 1992, as the debate over Roe v. Wade heated up, an event was planned in front of Buffalo’s GYN/Women Services. My friends and I agreed it was our obligation to ensure that women were able to make their appointments free from harassment from the notorious rabble-rousers who were coming to town. After all, GYN/Women Services provided prenatal care and regular obstetrics appointments for its many patients. It was not a killing field. It was a medical office that mainly provided routine office procedures like breast exams and pap smears in addition to providing legal abortions.

I went to the rally with two friends.

People screamed at each other from both sides of the street. On both sides of the issue. I didn’t like the things the Pro-Choice people were chanting: things like “Keep your rosaries off my ovaries,” and offensive rhymes which dragged religion into the issue. My friends and I didn’t have a problem with anyone’s religious practices, and we didn’t want to be associated with all that noise. So we wandered across the street to CVS and bought some electrical tape.

And we taped our mouths shut.

Truth is, we had been just as offended by what people on “our” side of the street were chanting as we were by the 7-foot images of partially formed fetuses that the folks on the Pro-Life side were holding.

And we wanted to separate ourselves from the rhetoric.

It would have been nice to have had an opportunity to express that. But no one asked for our story.

Reporters and photographers were busy looking for one cool image.

And their camera lenses landed on us.

When our picture was published in LIFE magazine, I brought a copy to school to show Kathy, my teacher-friend. I wanted to talk to her about the caption which read “Women tape their mouths shut to represent The Silent Majority who favor safe, legal abortion” — and how that didn’t quite capture the whole story.

I wanted to tell her about how proud I was for standing up for my views, but how — at the end of the day — when the news vans with their giant satellite dishes had driven away, I felt a little like a pawn in someone else’s chess game. How it had occurred to me everyone had an agenda and we, women, had been pitted one against the other by religious leaders and politicians, by media spokespeople who encouraged participants from both sides of the street to shout louder when their cameras were rolling.

Kathy looked at me coolly and said:

“I guess we were on different sides of the street that day.”

Kathy and I worked side by side for the rest of the year, but our interactions were different. I learned so much from her: how to treat children with dignity, how to walk the fine line between friend and disciplinarian, how to integrate non-native speakers of English into the larger class: so many things. One afternoon, I tried for the umpteenth time to discuss the the topic with her. I so wanted to make things right.

I never realized an issue could be so divisive that it could destroy a friendship.

Kathy taught me to keep politics and religion out of the workplace.

To be silent about “personal” matters.

But the personal is always political, and thirty years later, we are seeing what happens when people stay silent.

I still believe women must continue to have the right to make their own decisions regarding anything that impacts their bodies. I still believe that abortion must remain a safe and legal procedure for women who find themselves having to make difficult, life-altering decisions.

And I also realize that many other people still believe something 100% different.

And this is what happens in a democracy.

It is, however, possible to be vocal & respectful when expressing oneself with regard to a controversial topic.

If nothing else, Kathy taught me there are many legitimate sides to every issue. It is essential we understand that in acknowledging the opposing sides of the argument, we are not weakening our own stance.

Unfortunately, I believe that we are in for many more dark days ahead as for as the political situation in our country. That being said, we can only control ourselves, and while *certain leaders* may be normalizing disrespectful behavior and uninformed rhetoric, it behooves us to sift through the rhetoric of our politicians and remember to be civilized with each other.

Ever lose a friend as a result of political or religious differences? Which, if any, of your core beliefs have changed over the last 20 years?