Are You Proud of Your Sweet Little Bully? 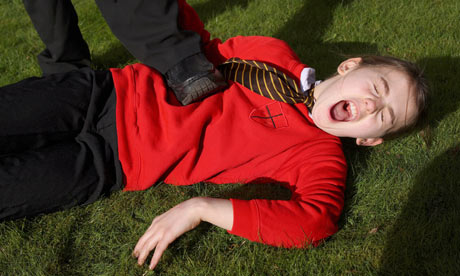 Recently I read one of the most amazing (and terrifying) blog entries called “Memories of a Bullied Kid,” on bullying from single dad laughing, a man who reflects back on a time in his life where he says he was systematically terrorized for years – but that he never said anything to anyone – except once. And he went further to report that when he reported the bullying, things got worse for him. Afterwards, he remained silent and endured the torture for over a decade. With so many students killing themselves these days, it amazes me that he is alive to tell the tale.

In the all the bullying literature that is out there, there is one piece of the puzzle that hasn’t been particularly well documented, and so I’m putting out there. Guess what? Sometimes parents of bullies are proud that their children are bullies. I have heard parents admit they would rather have their children be the ones “standing up for themselves” than the ones being bullied: that they have actually encouraged their children to get physical first, so that they are never made targets themselves. For me, this is the ugliest, darkest side to parenting.

Having been a teacher for 20 years now, and a parent for 11, I see that there is precious little time for elementary school to get to know each other at school. I know this because at the end of their 5th grade year, my son (and one friend) could not identify several of the children in their own class.

“I don’t know his name,” my son admitted.

His friend, who happened to be over that day shrugged: “Me either.”

It was unbelievable to me that my child and his friend could spend an entire year with the same people day in and day out and not know everyone’s first and last names, perhaps some tidbit of personal information.

I guess the sense of community has fallen out of the curriculum. Children are no longer taught to be good citizens, the ethics of being good people. The game is all about getting ahead, getting into the best schools — and kids learn early on that they may need to stomp on a few folks to get there. And I am sad to report that many parents encourage this type of aggressive, mean-spirited competition in athletics and academics. And meanwhile everyone is surprised that bullying in on this rise? Shocked when there is another incident reported, this time more gruesome than the last?

I never thought about college until 11th grade. Now, parents discuss college with their 1st graders. That’s a lot of pressure to put on children. When adults are stressed, they can go for a run, swim a few laps, take a yoga class. Well, kids get stressed out, too.  But sometimes their stress comes out less constructively. So if you don’t even know all the kids in your class . . . well, why not pick on her? She’s weird. Or him? He’s quiet. Or, if you are really sneaky, get someone else to do it for you?

Once learning their children have been acting as bullies, I’m always amazed at how unapologetic parents are. When I hear of kids who have been bullied and that some type of administrative action has taken place – even suspensions – where the school has agreed a particular child had overstepped too many times with too many kids – I am always shocked that part of the restitution never includes a written apology from the bully. No-one ever makes the offending kid write a note to the person he has been kicking around.

If my child intentionally (or unintentionally) hurt someone, he’d either be over at that kid’s house apologizing in person or he’d be writing letters: to the kid he hurt, to the principal (indicating that he understood the infraction), to the parents of the bullied child explicating in essay form precisely what type of punishment(s) he would be receiving at home that would befit his behavior at school.

What would you do if you found out your child was a bully? How would that conversation go? Would you be proud or horrified?

26 thoughts on “Are You Proud of Your Sweet Little Bully?”