A Commencement Speech by Alec Jacobson 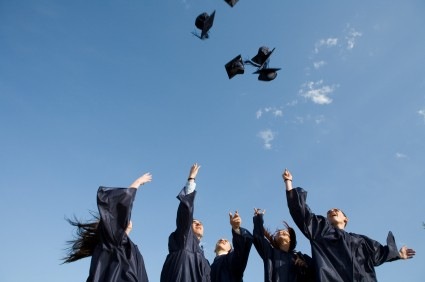 Recently, my super cool, crazy smart nephew was selected by his peers to deliver the commencement speech at his high school graduation which took place this past Sunday, June 25, 2011.

Our entire family was beyond overjoyed, and we joked that we would all need to wear Depends because, in real life, Alec is pee-in-your-pants funny! It is my understanding that during his last week of school, Alec wore some crazy stuff: weird retro sneakers; a hat with a pocket on it; a sleeveless, neon green pinny with the word “RUN” on it printed in hot pink. He was also spotted carrying a teenie-tiny, little Buzz Lightyear backpack, the kind of bag a little boy might tote to school on his first day of kindergarten. (It is also my understanding that everyone thought that his outfits and accessories were “off the chain.”)

I couldn’t wait to hear what Alec would say when he addressed the Class of 2011!

Here is what Alec said.

(NOTE: I edited Alec’s speech a bit for the sake of brevity. Please know Alec did all the niceties. He thanked the student officers, his teachers from kindergarten through twelfth grade, his parents, his siblings, and all the people who voted for him to speak. He also named specific individuals and rather than run around town getting written consent forms from everyone he mentioned, I simply omitted these specific references and kept things general.)

For those of you who don’t know me, I’m Alec Jacobson.

When I found out that I was going to be speaking at graduation, it was actually quite anti-climactic.

I was sitting by myself in The Commons during homeroom, waiting for first period Gym to start, when I heard Mr. W. come on the announcements and say: “And congratulations to Alex Jacobson for being elected to speak at graduation.”

You can imagine that after I heard that I was pretty befuddled because:

a) I was trying to play the word “SPEAKER” on “Words with Friends”;

b) I never in a million years thought I would have enough friends to vote for me to speak; and

c) there was literally nobody in The Commons to whom I could turn and share my excitement.

So it was just me, my contained bliss, and a tad bit of rage due to W’s mispronunciation of my name.

But I got over it.

I alerted my mother of the news via text only to have her respond in all caps with: “OMG! OMG! Who are you?! Probably not my son.”

And then my sister texted me, “Congrats! You’re amazing.”

Never in my life would I have expected to be here.

Just a few weeks ago, I sat at the Senior Banquet when it hit me that we’re actually finished with high school. I remember looking around, and taking everything in, and I realized that we LOOK all grown up. Four years ago, all of us looked feeble, immature and — to be honest — awkward. I mean, I was just a short little red-head, a “ginger,” with very few friends. But now, we are adults.

I may or may not still have red hair, but wow, we are a good-looking class.

More importantly, look at how far we have come.

For us, the future is bright.

The reality is that most of our high school years will be a blur. Sure, we’ll remember our good friends, our favorite teachers. We’ll remember our prom dates and those countless sectional titles that the boys’ and girls’ teams brought home. But the reality is that these events did not define us as a class. It is the people who have made this class truly one of a kind.

When looking at our class, many people define us by our intelligence. Sure, it is pretty incredible having students attending Harvard and Princeton and Yale. And nine going to Cornell. And while that is super impressive, the more defining aspect of our class is our diversity. We have people going to music school, business school, art school. Pre med majors, pre-law majors, and math majors. Future doctors, lawyers and CEOs right in this room seated before us. Because the truth is that this class is not only one of the most intelligent in our school’s history, but also one of the most unique.

For us, however, high school is just the beginning. It may seem like the end and, sure, it is the end of a remarkable four years. More importantly, this graduation marks a new beginning to our young lives. After all, I am giving a commencement speech, and the word “commence” means to begin.

I know it is sad, looking around right now and realizing that this may be the last time we are all together as a single, unified group. Tomorrow morning, I personally, will be going to camp for the entire summer, so to many of you, this is my goodbye. But I hate leaving things on a somber note, so I want you all to know that not only will I be back, but we’ll all be back: to make sure that our four years of high school aren’t just that blur. So I guess this isn’t truly goodbye, but an “until we meet again.”

In the meantime, go out and do something fun. Do something great with your summer and whatever lies ahead. For those of you who haven’t already seen it, watch the movie Into the Wild and tell me with a straight face that you don’t immediately want to immerse yourself in nature and discover your true self.

And like Mark Twain said: “Don’t let schooling interfere with your education.” Don’t rely on others to teach you things. Discover them yourselves because now we are on our own and the future lies in nobody’s hands but ours. Right now, we may think  “these are the best days ever,” but they won’t be. We have so much more to do.

Because as my friend penned in my yearbook: “Doesn’t everybody deserve to live large?

Alec’s friend touched on the elusive American Dream when he asked: “Doesn’t everybody deserve to live large?”

An affluent district that has been relatively untouched by the recession, I saw students fortunate to have such amazingly strong foundations. They have been able to concentrate on academic excellence. They have been able to focus on homework rather than having to work to help their parents make ends meet. They have lived in homes –  nice ones with green lawns. They have had pets to cuddle and closets filled with the right clothes. Many have taken expensive vacations abroad. They have not gone to bed hungry. They have gone to bed in their own beds.  As I looked around, I was strangely struck by how wealthy the school district in which I reside truly is. Not only in terms of fiscal resources, but in the fact that students are, for the most part, emotionally well supported.

Precious few have to tiptoe nervously in a world of instability.

And that is a blessing I am not sure they even realized.

When the Class President spoke, she quipped to parents in the audience that they needn’t fret about losing touch with their children because everyone is simply a text or Skype away.

This implied the ownership of laptops and/or cellphones.

No one batted an eyelash.

Of course these students have laptops and cell phones and unlimited calling plans.

It is implied that these students are going to live large.

For these students, the future is bright.

But I think about other students graduating from other districts, too — where the American Dream appears to have dried up. Where students are starting out in a slump. And as Dr. Seuss noted in Oh, the Places You’ll Go, “Un-slumping yourself is not easily done.” I imagine Alec’s optimistic message was perhaps, a little different from other commencement speeches held around the country where the concept of graduation as a new beginning is something being met with less optimism and more uncertainty.

My nephew wrote a great speech which he delivered beautifully — and with a fair bit of self-deprecating humor.

His peers voted him “Most Likely To Become President.”

We know Alec is ready to fly.

My only wish would be for everyone to have that same opportunity to live large.

What wise words would you offer the graduating class of 2011? And do you think everyone deserves to live large?

36 thoughts on “A Commencement Speech by Alec Jacobson”