Ringtones Adults Aren't Supposed To Hear - renée a. schuls-jacobson
because life doesn’t fit in a file folder
JOIN MY TRIBE.
Sign up for Occasional Extras and Special Discounts.
WHAT I WRITE ABOUT
SEE MY ART.
READ MY WORDS.
SEE MY TWEETS.My Tweets
HANDS OUT OF MY DRAWERS! 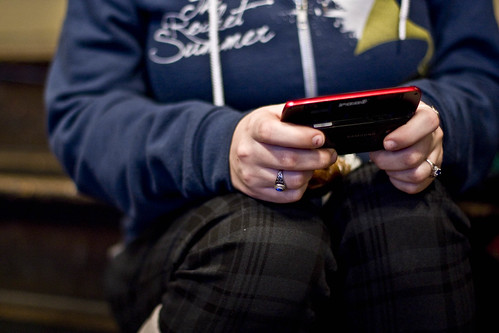 As a general rule, unless someone has an Individualized Educational Plan, I require students to turn off all electronics for the 50 minutes they are in my class. iPods and MP3 Players? Off. Laptops? Off. Cellphones? I don’t even want them on vibrate as I find the buzz distracting. No one has ever balked; however, this past fall I did have a weird experience that caused me to learn about something new in the ever-evolving world of technology.

In this one particular classroom, students generally sat in straight lines facing front: Not my favorite configuration, but we didn’t have many options in our tiny, sterile, windowless space. One day, for no apparent reason, several students looked sharply to the opposite side of the room at the exact same moment while other students covered their ears. Thinking nothing of it, I simply continued my lesson. After class, a most loyal student told me about The Mosquito Ringtone, a tone specifically designed to ring at a decibel that is not easily detected by adult ears. This student also told me that some students use it to cheat.

Apparently, British inventor, Howard Stapleton discovered an ultra high frequency that drives away teens much like a dog whistle affects dogs. His idea was to use his invention to keep teenagers from loitering outside of shops at night, thus making the area around his storefront uncomfortable for loitering teens while leaving the money-spending adult customers unaffected.

… teens from the inventor’s hometown caught on to what the company was doing and decided to put turn the idea into something they could use. They took the ultra sonic frequency and converted into to a cell phone ringtone which they aptly named “Teen Buzz.”… The ringtone caught on like wildfire in the UK and quickly spread throughout the reaches of the Internet to teens everywhere. Teens learned they could hear each others phones ringing at school but their teachers couldn’t.

Initially skeptical, I was amazed when tried the hearing test experiment with my 10 year-old son and learned that I simply could not hear certain tones beyond a certain frequency. I kept saying, “Can you really hear something?” and he kept saying, “Yes, I can hear it. Now can you turn it off!” I thought I had great hearing! Sheesh! Since that day, I have remained ever-vigilant in class, relying on my eyes as well as my ears. Students are clever and always a step ahead when it comes to technology – especially when it comes to finding a way to use it to cut corners or keep up with their important social lives!

I must admit, I have been waiting for a similar incident to occur. It hasn’t (yet), but at least now I am prepared.

Have you come across this technology in your life? What do you think about it?