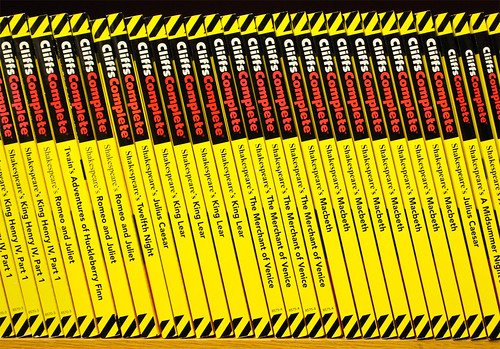 I stumbled into a local Barnes & Noble yesterday and happened to enjoy watching a small group of high school students studying together. One student had a laptop and was tapping away and the others were reading. It was at that point I realized these students were reading those insipid CliffsNotes. You know the ones: Those skinny little yellow pamphlets designed to help English students better understand literature. For those of you who just landed on the planet, a well-intentioned guy named Cliff Hilegass started the company in his basement with a few Shakespeare titles; the company (no longer owned by Hilgrass) now offers notes on hundreds of titles. Detractors of the guides claim they allow students to bypass reading the assigned literature. The company, of course, claims to promote the reading of the original work, and views its material as a supplement, not as a substitute to the assigned reading.

I can only tell you what I saw: Several high school students sitting in the café sipping expensive coffee drinks not reading the primary text. They did not even actually appear to have the original text with them, and in between reading the CliffsNotes, they alternately texted friends, took phone calls, listened to music on their iPod Touches, and chatted it up with other friends who entered the café area.

Here’s my feeling on this topic. Ick. While these were high school students, I have no doubt that this is a similar process with regard to the way my college students approach reading and, later, writing. These days I feel a little hesitant about praising the work of students whose work I think is interesting or fresh, as I worry I may be positively reinforcing the habit of some students of picking up critical information from an outside source – a practice commonly called plagiarism.

I know that there are a million other sources available to students today besides CliffsNotes. Hell, they can purchase entire papers right off the Internet. Last year, a student actually listed a posting on Craigslist requesting someone to write his final English paper because he just didn’t have the energy to do it. He was willing to pay $150. I believe someone from the Monroe Community College English Department responded to the post and nailed the lazy, little twit. But I do wonder what has happened to personal pride and the hard work ethic. I wonder how many parents actually sit down to discuss cheating with their children. Do students understand that taking someone else’s ideas and presenting them as their own (without giving citation) is actually unethical? Do their parents?

For me, the person who uses CliffsNotes is a type of person who is afraid to think critically. Reading literature gives students practice in making their own connections, drawing their own conclusions, which can be supported by the facts with which they have been presented. I want my students to practice critical thinking so that they recognize that their voices and opinions are vital, and have power, not only inside the classroom but outside the classroom as well. The fact that students would trust a person that they do not even know just because he/she has a few extra letters after his/her name (PhD, M.S., D.D.S., M.D., J.D., etc..) represents another problem we have today; namely, people are too willing to take it from “the experts” before considering things thoroughly themselves. Students who use “Notes” of any form are not only cheating themselves, but they are cheating the world of their ideas. The best students are ones who are willing to take risks, engage in a dialogue about the literature: They are the ones who will be prepared to deal critically and creatively with opposing views, and recognize they need not feel threatened by ideas or beliefs which are different from their own.

I know great students exist. It just seems so dang easy to cut corners these days, like we have made it too easy for students to not do all that hard work that must occur inside their brains long before the pen ever hits the paper, or fingertips ever touch the keypad.

What do you say to your children to encourage them to think independently and express their own ideas, especially if they are struggling with the material?

5 thoughts on “Notes For Twits?”